by Livestock Genetics From Spain 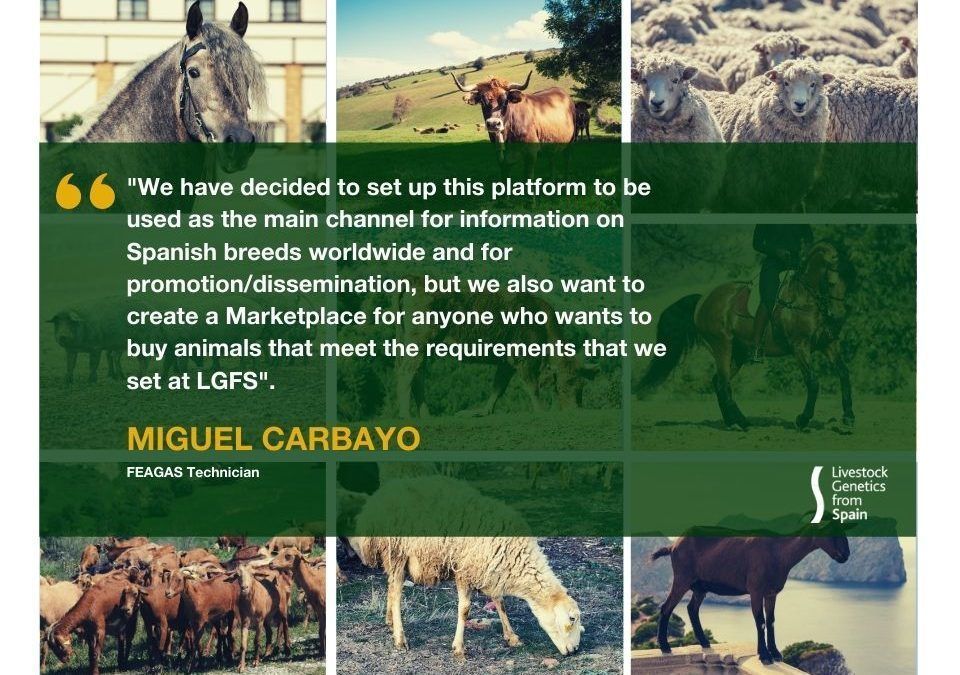 Livestock Genetics From Spain is an initiative that had been on the “to do list” for many years and was latent but never forgotten. FEAGAS was aware that there was a need to design a niche community where Spanish pure breeds could be enhanced. It was even proposed to the Ministry of Agriculture, Fisheries and Food to promote this initiative, but it was not possible.

It has been thanks to the granting in 2018 of the Exportgen operational group: “creation of a platform for internationalisation and marketing of Spanish purebred genetics”, that we have been able to consider launching an initiative focused on the Achilles heel of the sector: the promotion and marketing of our purebred breeds. From this idea of years ago, the possibility of sow the seeds of internationalisation and the right conditions for it to germinate emerged. It has had to be this past year that these favourable circumstances for LGFS have been fulfilled. The whole team will certainly remember this year of the pandemic, causing major changes in our internal operations and, despite this, we have continued to move forward against all odds.

However, from this health event, we have been able to adjust our strategy and we have thrown ourselves fully into digitalisation: it was now or never! In this change of strategy, we have had the support of the participating associations, Ms. María Naranjo, General Director of Food, Wine and Gastronomy of ICEX, who has supported us unconditionally from the beginning, as well as research and educational organisations with which we have collaborated. This breeding grounds, fed by a situation that is changing day by day, extreme uncertainty and the impossibility of travelling to the main trade fairs, allowed us to focus and this is how the idea of working with ICEX (making use of their “from Spain” logo) came up.

From there, we only had to choose a name to promote the global brand and at the same time “umbrella” from which to work as a group and row in the same direction: the promotion of the Spain brand in the animal genetics sector called Livestock Genetics From Spain. In fact, we have had to give a lot of thought to all the casuistries, so as not to leave anyone behind and so that no one feels excluded, but rather we looked for the inclusion of all suppliers of animals and genetics of the best quality. That is what we want to aim for with the creation of LGFS. We still have a long way to go

It is very difficult to explain the steps of creation when it is still an idea that we have put down on paper and now we have to take it to “tangibility”. In any case, several factors have come together, such as a source of funding, a proactive team and human resources, complementary players and, above all, the right circumstances to generate the necessary momentum to move from idea to action. I cannot answer you about the how, as it is a journey we have not taken yet! However, I can give you an answer as to the why.

Generally speaking, Hispanic society has always suffered from a lack of self-esteem and we have seen how our European compatriots have overtaken us from the right at full speed in certain markets or specific sectors. And for example, from 2009 to 2018, Spain holds 12th place in imports of beef semen in the EU and 11th place in exports in the same period. Do we really believe that we deserve these positions of the “arrière du peloton” as our French neighbours would say (5th and 3rd respectively)?

We believe that no, we have excellent animals and leading genetics… but we lack the communication and union to move forward and go further. This is the real reason why we have decided to set up this platform to act as the main channel for information about Spanish breeds worldwide and for promotion/dissemination, but we also want to create a marketplace (a buying and selling market) so that anyone who wants to buy animals that meet the requirements we establish within LGFS (being registered in the Stud Book, being in high percentiles, having passed all the health tests necessary for their sale, etc…), can do so with total security. But also, for the sector’s suppliers, being the channel that concentrates a representative part of the supply, it is attractive for them to be able to have the animals available in this world showcase. In this way, the Effect Network, also known as the “snowball effect”, can be created: the more it grows, the faster it grows and the further it goes. And the strategy is to create value for the customer and compete by exclusive segment rather than by price, as this last strategy would be a losing strategy and at LGFS we are here to go very far

We have identified 3 types of potential customers who are willing to purchase.
1. A large company or corporation worldwide that wants to be a distributor of one or more breeds in one or more countries. Here we are talking about large quantities and periodicity and it is a very exigent and demanding market. It is not our most immediate target because of the buying power they have. If they were interested, it would be a sign that we are doing things right and we are certainly not closing that door.
2. This customer segment is more of a local or regional distributor who wants to provide different solutions to his customers with breeds that are less used or little known, and that can nevertheless provide advantages in terms of adaptation and production that the breeds they work with do not offer. This, we could say, is our main target customer, as he knows the export operation and he is also on the ground and knows the market in his region to perfection.
3. In this case, they would be individual operators, breeders, groups of breeders, or individual or small groups of vets who are interested in the use of other breeds. They are the ones who may find it most useful to get information and advice from the experts on the same platform and who may encourage the operators in the previous point to contact us.

Actually, the process looks simple on paper. First the customer requests a quotation according to required characteristics and approximate shipping date. At this point, the genetics supplier has to confirm availability and price in order to meet the client’s conditions. Once an agreement has been reached, the next stage is the preparation phase, in which a series of analyses must be carried out to meet the health requirements imposed by each country. And the third phase is the management of logistics and shipping to destination, which also involves knowledge and experience in live animal exports. Each operation is different and each client, country, animals, etc… create a different situation. No order is the same as the previous one! It sounds easy, but it is not, and it takes a lot of time behind the success of the operation.

Without a doubt, the least pleasant part is the administrative obstacles that third countries have signed with each Member State within the EU. These are bilateral agreements in which, on occasions, we come up against contradictions or requirements that are impossible to meet, and we lose the sale to the detriment of another country whose agreement is more favourable for export. In this aspect, we have a long way to go and, above all, LGFS, through FEAGAS as the Royal Federation of Selected Cattle Associations, should act as interlocutor and advisor in the negotiations between the MAPA and a third country to sign a trade agreement that allows Spanish breeds to be competitive with other European countries or third countries. There are sanitary obstacles with countries where we cannot comply with the sanitary conditions because of the excessive time required to be free of scrapie, and there are currently no farms that comply with them. These are the inconsistencies that we would like to smooth out and facilitate this intercommunication between the breeders’ associations and the MAPA negotiating team on these issues at a bilateral level.

The operational group of Exportgen, seed of LGFS, we are working with 3 associations. ASTURGEN as a marketing entity for ASEAVA and the Asturiana de los Valles cattle breed, ACRUGA for the Rubia Gallega cattle breed and ANCCE for the Purebred Spanish Horse breed. In addition, FEAGAS acts as an executing member of the project and manages the work of external entities such as AGERÓN as international advisor, Xenética Fontao and Visavet as reference centres for RDI and Esmedagro as advisor in the drafting and monitoring of the project. In addition to LGFS, we have external actors for the issue of social media and digital marketing such as Integral Media, as well as mentors and coaches for the execution of the digital and technological part such as Alejandro Novás and José Luis Vives. It is a human team that complements each other in their area and that is the nice thing about the group. Oh, and in this 2021 we have opened participation in LGFS to all associations that are interested in joining the boat! And we already have more than a dozen new associations in this adventure, which is the best sign that there is interest and that we are on the right track!!

We have several pending milestones, the closest is to add more associations and, once we have analysed the work capacity and supply, to be able to expand to other players, but this will probably not be done until the second half of 2021. Another milestone is to have the platform set up, both in the legal and operational aspects, as well as in traffic management, so that it is optimised to the maximum in order to dedicate our time to aspects that add value rather than to repetitive and administrative tasks that do not (and yet are fundamental) but that we can computerise and parameterise in such a way as to maximise these processes through automation. For me (who is in charge of this part) this would be the most important thing, as it is a challenge of vital importance for the functioning of LGFS. Then we could spend the time to follow up on new activities, new milestones, and new horizons. By 31 December 2021, the first thing I would wish for is that we have the health to continue, that we are more motivated than we are now with the development of LGFS and that we could return to a certain normality to be able to move freely and be present at as many fairs as possible. Unfortunately, we have not been able to enjoy these wishes in 2020, and that is why I am asking for it in 2021. If that comes true, I believe that the milestones we set ourselves will become a reality – only time and our work will tell!